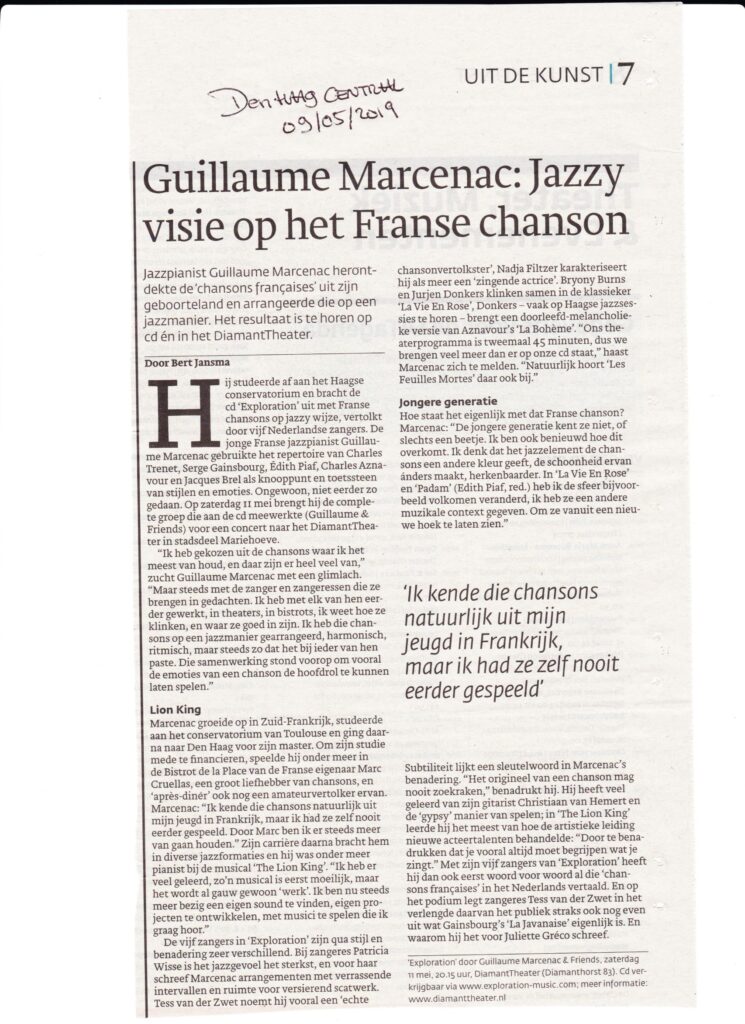 Jazz pianist Guillaume Marcenac rediscovered the French chansons from his native country and plays them in a jazz way. The result can be heard on the album and in the DiamantTheater.

He graduated from the Hague Conservatory and released the album ‘Exploration’ with French chansons in a jazz way, performed by five Dutch singers. The young French jazz pianist Guillaume Marcenac used the repertoire of Charles Trenet, Serge Gainsbourg, Edith Piaf, Charles Aznavour and Jacques Brel as a focal point and touchstone of styles and emotion. Unusual and not done before. On Saturday, 11 May, he will bring the complete group that collaborated on the album (Guillaume & friends) for a concert at the DiamantTheater in the Mariahoeve district.

“I have chosen from the chansons I love the most, and there are many of them”, sighs Guillaume Marcenac with a smile.

“But always with the singers that bring the chanson in mind. I’ve worked with each of them before, in theatres, in bistrots, I know what they sound like, and what they’re good at. I arranged those chansons in a jazz way, harmonically, rhythmically, but always in such a way that it suited each of them. That collaboration was paramount in order to let the emotions of a chanson play the leading role.”

Marcenac grew up in the south of France, studied at the Toulouse Conservatory and then went to The Hague for his master’s degree. To help finance his studies, he played in the Bistrot de la Place of the French owner Marc Cruellas, a great lover of chansons, and ‘après-diner’, also an amateur interpreter of them.

Marcenac: “Of course, I knew those chansons from my youth in France, but I had never played them myself before. Marc made me love them more and more.” His subsequent career brought him into various jazz formations, and he was, among other things, pianist for the musical ‘The Lion King’.

“I learned a lot, a musical like that is difficult at first, but it soon becomes just ‘work’. I am now working more and more on finding my own sound, developing my own projects, playing with musicians that I like to hear.”

The five singers in ‘Exploration’ are very different in style and approach. Singer Patricia Wisse has the strongest jazz feeling, and for her, Marcenac has written arrangements with surprising intervals and room for decorative scat work. He mainly calls Tess van der Zwet a real chanson interpreter, and he characterizes Nadja Filtzer as more of a singing actress. Bryony Burns and Jurjen Donkers sound together in the classic ‘La Vie en Rose’. Donkers – often to be heard at jazz sessions in The Hague – brings a lived and melancholic version of Aznavour’s ‘La Bohème’. “Our theatre programme lasts twice 45 minutes, so we bring much more than just our album”, Marcenac hurries to mention. “Of course, ‘les feuilles mortes’ is one of them.”

What about the French chanson, anyway? Marcenac: “The younger generation doesn’t know it, or only a little. I’m also curious how this will come across. I believe that the jazz element gives the chansons a different colour, the beauty of it makes it different, more recognizable. In ‘La Vie en Rose’ and ‘Padam’ (Edith Piaf, Ed.), I completely changed the atmosphere, I gave them a different musical context in order to show them from a new angle.”

“Of course, I knew those chansons from my youth in France, but I had never played them myself before”

Subtlety seems to be a key word in Marcenac’s approach. “The original of a chanson must never be lost”, he emphasises. He learned a lot from his guitarist Christiaan van Hemert and the ‘gypsy’ way of playing. In ‘The Lion King’, he learned the most from how artist leadership treated new acting talents: “By emphasizing that you should always understand what you’re singing.” With his five singers of ‘Exploration’, he first translated words as ‘chansons françaises’ into Dutch. And on stage, singer Tess van der Zwet will explain to the audience what Gainsbourg’s ‘La Javanaise’ really is. And why he wrote it for Juliette Greco. 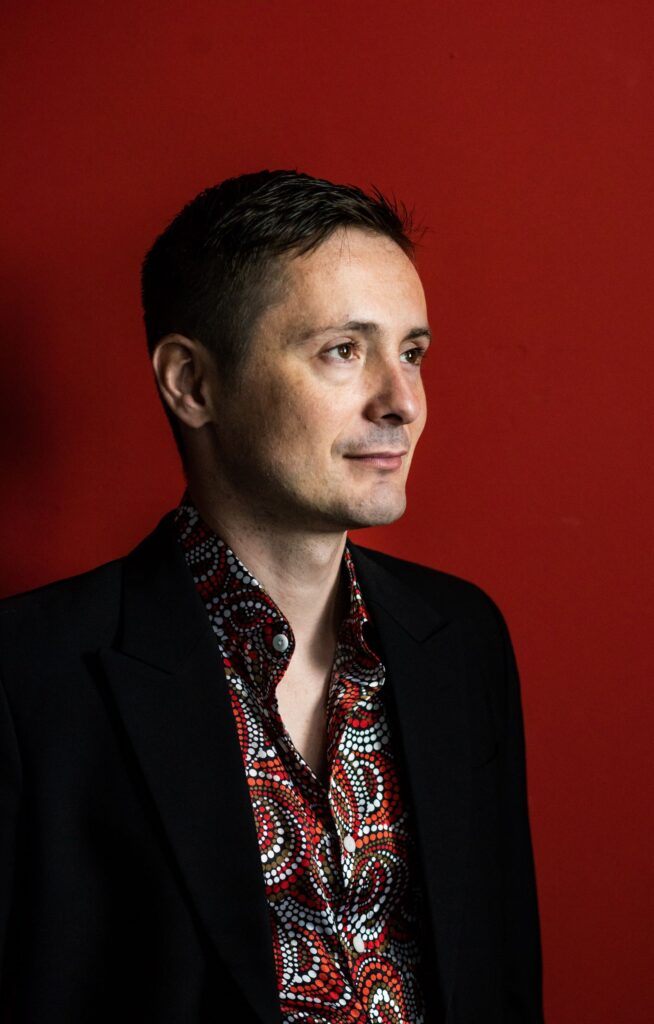